Today 31st October happens to be Sardar Patels 143rd Birth anniversary and statue of Unity is termed as tribute to his great efforts of uniting all 550 princely states to republic of India.

The statue is worlds tallest status standing tall 182 mtrs (597 ft) high ( 240 mtrs if included base of 58 mtrs) surpassing some of worlds famous statues by large margin. 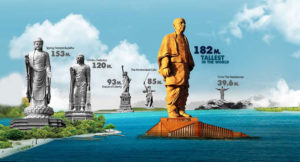 The statue of Unity has been designed by noted Indian sculptor Ram Sutar.

The foundation for the statue of unity was laid on 31st October 2013 with them CM of Gujrat Mr Modi. The Statue of Unity has been completed in record time and is inaugurated today by Mr Modi.

The project has been estimated to be built at cost of around Rs.3000 crores and bid for the construction was won by Larsen & Toubro which placed the lowest bid.They began the construction of the same in October 2013.

given a brass Cladding.

The statue work was also criticized by opposition parties as well many other economist and due to the huge cost involved in the making. It was also opposed by some of the farmers of surrounding villages on the settlement issue.

The statue of Unity is expected to be major tourist attraction and  draw a large set of visitors giving the boost to tourism as well as surrounding economy by generating the employment and local shops , hotels and other businesses.

The Statue of Unity project also includes 3D presentation of Sardar Patel work,memorial,visitor center,memorial garden,amusement park ,research centers and institutes in the 1st phase . Also there has been plan to develop more attraction for the tourists.