Cristiano Ronaldo reportedly has agreed and accepted the 2 year suspension sentence in prison and to pay the heavy fine levied by the Spanish Courts under the tax evasion case.

Ronaldo has reached a deal with Spain authorities to settle a tax evasion case by paying a fine of 18.8 million Euros or approximately Rs.150 cr in Indian Rupees. 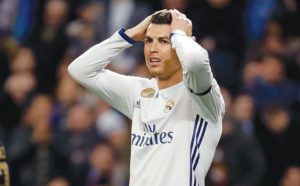 As reported on Reuters Ronaldo was accused of defrauding Spain’s tax authority of $17.7 million in relation to his image rights between 2011 and 2014. He initially denied the allegations when presented in front of the court and no resolution was reached for the the case.

However Ronaldo will unlikely to go on Jail as he has accepted the allegations and has agreed to play the fine to avoid the same.

This has been a case similar to Lionel Messi wherein the Messi was found guilty under tax evasion and was sentenced to 21 months jail and had to pay the fine of € 1.8 mn.

However it would be interesting to see how long the case on Ronaldo will carry as he has accused in 4 tax evasions compare to 1 of Messi.

Ronaldo will be playing the first match of FIFA World Cup 2018 against the Spain later tonight . Ronaldo has never won the the footballs biggest prize and this could be his last chance to get the same he is already now 33 years old.